Make it compliant to boost export

Make it compliant to boost export 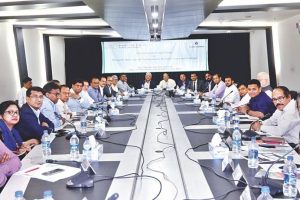 Industry experts participate in a consultation session on the findings of the study “The leather sector after the tanning industry relocation: issues and challenges” at The Daily Star Centre in Dhaka yesterday. The event was organised by The Asia Foundation and the Research and Policy Integration for Development, a non-profit organisation. Photo: Prabir Das

The government should make the central effluent treatment plant at the Savar tannery estate fully functional to make the leather sector compliant and boost export, said Syed Manzur Elahi, founding chairman of Apex Footwear Ltd and Apex Tannery Ltd.
“Our first priority should be making the CETP fully functional,” he told a discussion in the capital’s The Daily Star Centre yesterday.
The discussion on “The leather sector after the tanning industry relocation: issues and challenges” was organised by the Asia Foundation and the Research and Policy Integration for Development (RAPID).
Before they were relocated, tanneries in the capital’s Hazaribagh used to produce every day about 21,600 cubic metres of environmentally hazardous effluent containing chromium, sulphur, ammonium, salt and other chemicals. These tanneries used the toxic chemicals to treat rawhides and discharged the toxic waste in the open sewers and pits completely untreated, posing serious health hazards to the people.
The liquid waste ended up in the river Buriganga untreated, as none of the factories in Hazaribagh had adequate infrastructure for ETPs.
Eventually, the government was prompted to relocate the factories to an estate where the effluents could be treated.
At yesterday’s event, Elahi said the leather sector would rebound globally as prices of leather products and synthetic ones have become almost similar.
“We also need to set up a product development centre,” he said, adding that India and Vietnam had made great strides, thanks to such centres.
The former caretaker government adviser also called for developing the skills of workers and mid-level managers.
The relocation of the leather tanning industry from the capital’s Hazaribagh to Savar has faced several hurdles including the lack of a fully functional CETP and other supporting units, according to a paper circulated at the discussion.
“If the quality of the CETP and other supporting units is compromised, the whole purpose of the relocation will be lost.”
RAPID Chairman Abdur Razzaque and Prof M Abu Eusuf of the development studies at Dhaka University made a joint presentation.
“If there is no compliance, there will be no business for Bangladesh in the leather sector,” Prof Eusuf said.
One can easily spot the deficiencies by simply looking at the tannery estate, he said, adding that some improvement had taken place.
Sehly Sadeque, assistant engineer at the BSCIC Tannery Industrial Estate, said discharge treatment was improving in Savar.
Khondaker Golam Moazzem, research director at the Centre for Policy Dialogue, said tanners needed to improve their image.
Stern actions should be taken against non-compliant factories, he added.
It is very unfortunate that Bangladesh imports $1 billion worth of leather every year while the country has unused rawhide, he said.
Leather goods makers import the leather because many foreign buyers do not accept products made from Bangladeshi leather, he said.
Syeda Zakia Hossain, senior lecturer of the University of Sydney, said Bangladesh could observe the policies, processes and strategies of the countries that have fared well in the leather sector and learn from them.
Atiur Rahman, former governor of the central bank, said there were a fund of $200 million as well as the export development fund at the central bank that the leather sector could utilise to make the factories compliant.
Saiful Islam, president of Leather goods and Footwear Manufacturers and Exporters Association of Bangladesh, also spoke at the event.

This article was published in The Daily Star on 6th May, 2019 and was written by their Staff Correspondent. The link of the article is provided below: